Together with an Italian-American missionary, and in collaboration with a group of local churches, CLC Italy was able to provide 1,000 English Bibles for a refugee centre. Money was raised from various sources in the USA, and CLC Italy was able to quickly find very economic Bibles for this initiative. Most of the refugees were from various African countries, many of which are English speaking. Even refugees from the Middle East and Northern Africa, who speak English as a second language, were given Bibles. Local missionaries in Sicily distributed the Bibles. This recent initiative, from January 2016, was a real blessing, and we are thankful that we could be involved in a small way during the refugee crisis. 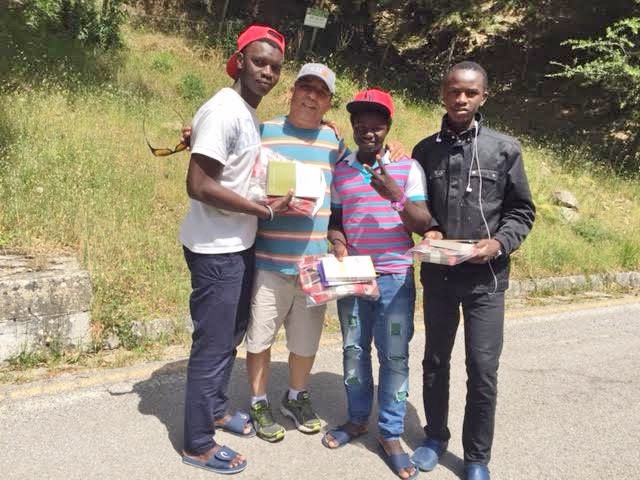 The Catalyst by Don Teall

1950 was Roman Catholic Holy Year and the Pope was offering spiritual and temporal rewards to pilgrims visiting Rome from all around the world to celebrate the Jubilee. Two young men in their early twenties, and just out of Bible School, began a three-month bike trek to Italy in the summer of 1950 as a holiday and also to pass out gospels and tracts to pilgrims. This was the beginning of the story which led eventually to the opening of the first CLC bookshop—in Florence, Italy—in 1956, followed by others in eight more Italian cities.

Shared by Ralph and Alice Leishman

Two outstanding quotes remain fixed in our memories that have served us well over the years.

When we opened in Turin, Italy, in 1989, an Italian elder stated at the inauguration:
“It’s fine to begin well, more important it is to end well”.

The second quote comes from John Silk, “There is no success without a successor”.
Thank God, He has honoured the desires from these quotes by providing Gary and Anita Chamberlin to replace us when we retired.